How Honeypot went viral for under $100... and did it more than once! 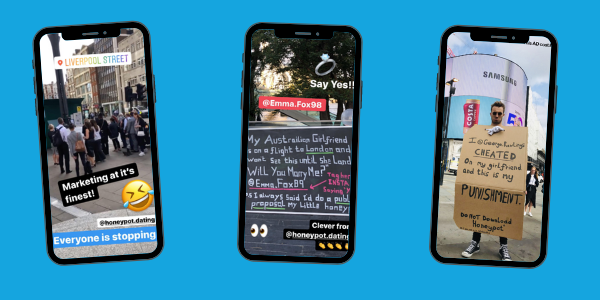 Going viral is often considered the holy grail for marketers and content creators. Generating mass exposure for relatively low cost can provide affirmation that your audience genuinely relates to the message or story you are telling. Of course, brands do go viral for the wrong reasons too... However, London-based 'micro-dating' app Honeypot might just have found the recipe for viral success, having racked up 1.5 million impressions since launching in August, through a number of creative guerrilla marketing campaigns. And at a cost of just £54.74 too!

We caught up with Honeypot co-founder George Rawlings to hear more about their recent success, the lessons he has learnt, and his advice for how you too can go viral. Read George's thoughts below or watch the video clips to see his full answers.

What made you start doing things differently?

Budget! It's very expensive to market yourselves and do paid advertising on things like Facebook and Instagram. It's very, very competitive, which means it's very expensive. On Instagram, it works out at about £2.50 per download, so we thought there must be an easier way to get these downloads in rather than just doing it the conventional way that all these other companies are doing. We sat round a table and thought about how we could get Honeypot out there in the most unusual way that would attract attention. There's also so much noise out there currently, and people are struggling to consume ads. We thought we'd try some guerrilla marketing to tell a story and evoke some sort of emotion but, ultimately, we wanted to get a reaction out of someone where they would take a picture. What advice do you have for others about trying this approach to marketing?

I think one thing that they need to remember is to relate it to their brand. But, you've also got to just try something! Lots of people sit on ideas, especially when it comes to guerrilla ideas because they're quite labor intensive. You've got to put yourself out there and put something together that's quite unusual. It's got to look like its off the cuff, and be really, really raw. You don't need to set anything up that's really fancy and glossy - don't do any of that! The whole point of what we're trying to do is to get people to take pictures, where the brand is subtly included in that picture. But, the main advice is to get out and do something. How do you know if an idea will go viral?

We know within 20 seconds of positioning our boards if it's going to go viral, because:

- Are we stopping people?
- Are we getting people to take pictures?

You know within a small sample of people walking past if this is going to work or not. You know very quickly - but you only know by trying! What have you learnt from Honeypot going viral?

I find it fascinating to see how you can make the public stop to read something and capture their imagination. It's fascinating to see the psychology. What's the first thing that happens when someone walks past something? They look at it and, if the first line is bold enough, they reach down to get their phone because they want to take a picture of it. If you can get someone to do that then you're onto a winner. What are the results of these guerrilla marketing campaigns?

Since we started these campaigns we've been averaging about 150 downloads per day. We've got nearly 6,000 downloads in now, and we're just growing our community of people that are open to spontaneous dating. It's been a huge success and those 6,000 downloads are just from doing these campaigns. We've got huge reach on LinkedIn as well, where our identity as individuals also comes into play. We've had about 1.5 million impressions and views on LinkedIn from just 3 or 4 posts, which is insane. Keep up with Honeypot's latest viral stunts by following them on LinkedIn!

How We Celebrated World Photography Day with a GDPR-Compliant Photoshoot